This week, we get in touch with our dark side, and take a whack at statting out everybody's favorite mustache-twirling baddie, Bargle the Infamous.

Of course, this is not the straight magic user variation introduced to so many of us in Frank Mentzer's Basic Set intro adventure, nor the versions presented in the Grand Duchy of Karameikos Gazetteer or later Karameikos: Kingdom of Adventure Mystara boxed set. 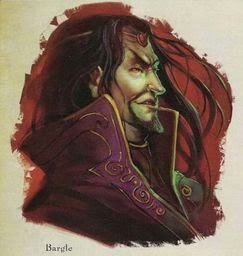 The Bargle of Thorn's Mystara is a thief in addition to being a murderer and general scoundrel. I didn't want to have to slog through the multiclassing rules, though, so I simply chose the "Criminal" background from Chapter 4. Perhaps, once I am a bit more entrenched in the ruleset, I'll go back and work him from the ground up as a thief.

The flavor of the Warlock class fits perfectly with a lot of the thematic magical elements I've been juggling with the Chronicle. This 5th edition incarnation of Bargle is in a bit of a unique position, as his Otherworldly Patron is both demonic and fey. Thus, I freely chose between those benefits when selecting level-based options for a 9th level writeup of everybody's favorite Infamous One.

Not statted out quite yet is Bargle's familiar: the "dark Silva" Jaelle, a  Blackmoor Soulbound Construct shell infested with a demonic host. Rather than the silver or gold Val'kira bracers, Jaelle's lower arms are twined with barbed, blackened iron. Rusty reddish demon-infused bloodstones jut from the inflamed skin of her arms and the back of her hands, caught within snarls of the ironwork. Her sunken eyes glitter feverishly, the silvery irises tinged with a hellish vermeil-like sheen. 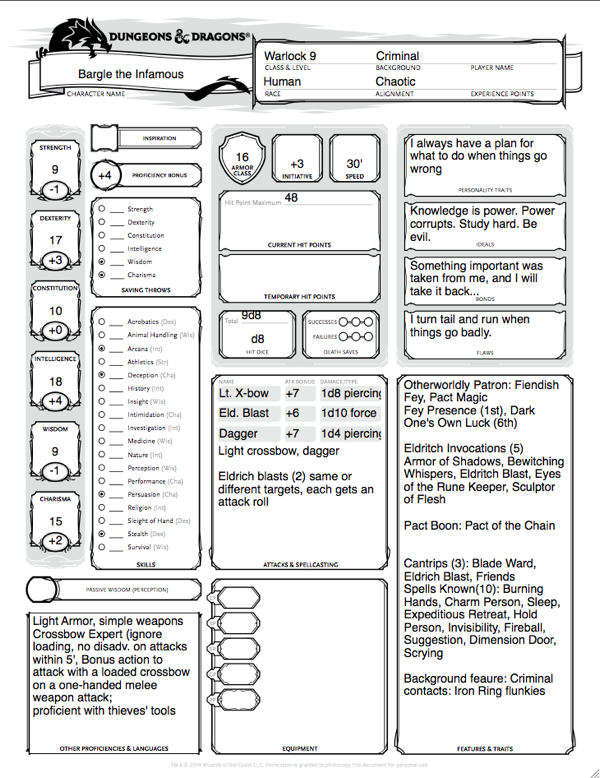